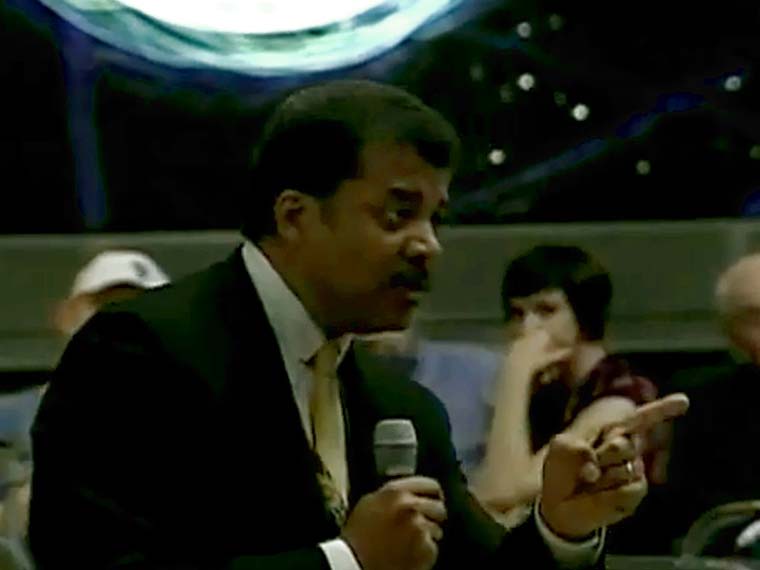 Neil deGrasse Tyson – SciCafe: Life the Universe and Everything

Neil deGrasse Tyson – SciCafe: Life the Universe and Everything

Brian Greene - The Illusion of Time

Atom - The History of Atomic Physics

Astrophysicist Neil deGrasse Tyson is the larger than life Director of the Hayden Planetarium in New York, and an ebullient evangelist of science. He was never not going to be famous and, already a scientific adviser to the US President and the host of PBS Nova, his star is set to rise even further when his 13 part follow up to Cosmos, produced by Seth MacFarlane, comes to our screens.

His lectures are a unique blend of humility and braggadocio, and his boundless enthusiasm often bubbles over into stand up comedy – including good natured mocking of his audience. This is a Cafe setup rather than a lecture and while deGrasse Tyson takes his cues from the audience there is no doubting that this is a performace, replete with well honed stories and anecdotes. One reason he is so comfortable here is that the venue is deGrasse Tyson’s home turf, the magnificent Hayden Planetarium. A giant meteorite dominates the centre of the domed hall as he works the room, videos of the universe projecting onto the walls around him.

By turns fascinating, exciting and highly amusing, he is also deeply thought-provoking in his cautioning against the dangers of ignorance and dogma. Always captivating, he closes with a dramatisation of the  upcoming near-Earth approach of asteroid Apophis (2029/2036) which is absolutely riveting.

SciCafe: Life the Universe and Everything with Neil deGrasse Tyson

Brian Greene – The Illusion of Time

Atom – The History of Atomic Physics