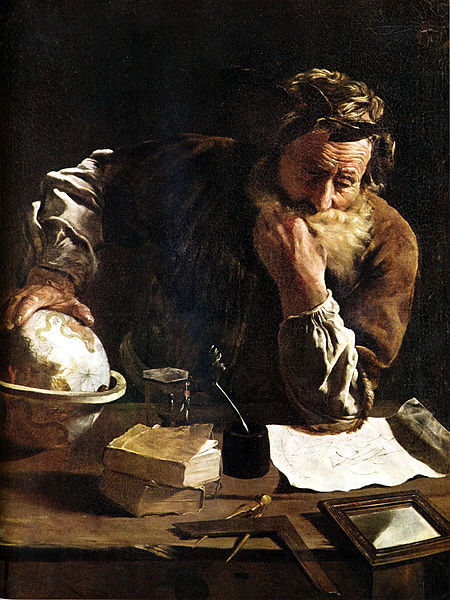 Archimedes is the most famous of the ancient mathematicians, and not just because of his penchant for running naked through the streets shouting ‘Eureka!’. A genius centuries ahead of his time he calculated an accurate value for Pi, discovered the principle of water displacement and invented the archimedean screw.

“Give me a place to stand, and I will move the earth”
– Archimedes.

He also devised ingenius war machines including variable range catapults, pulleys and grappling hooks capable of lifting boats out of the water, heat rays used to burn enemy ships by focussing sunlight with a giant array of mirrors, and may even have created the Antikythera Mechanism.

This story is every bit as exciting and mysterious as that incredible discovery. In the middle ages vellum was rare and expensive and monks would sometimes reuse an older manuscript, or ‘codex’, in order to make prayer books. These recycled books are known as palimpsests. The new author would unpick the seams, wash the leather pages of their original text in order to produce their own religious writings and then rebind the books. However, in certain cases the original script could be still be seen in faint outline behind the new text.

In the early 20th Century one such book showed up in Constantinople and a Danish Professor made the astonishing discovery that the original text was ‘The Method’, a treasured lost book of Archimedes. He photographed the pages and set about trying to translate the work. But then, in the confusion of the first world war the book went missing again and was presumed lost for ever. It resurfaced at auction decades later and modern scientists have now managed to decode the entire text, including never before seen diagrams, complicated mathematics, and tantalising hints that Archimedes may have been on course to discover calculus 1,800 years before Newton and Leibniz.

There are two videos below, the first ‘Archimedes’ Secret’ is a BBC Horizon documentary telling the entire story, the second is a fascinating Ted Talk by William Noel, a curator of ancient books who helped unravel the mystery of the Archimedes Palimpsest.

The Secrets of Archimedes

0
+1   0
previous Richard Dawkins: Universe - "Queerer Than We Can Suppose"
next Isaac Asimov's 'The Last Question'