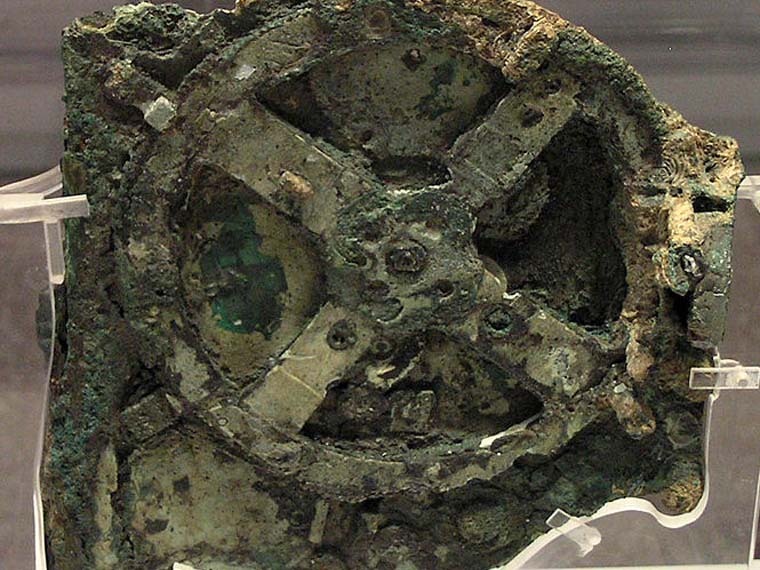 Where do you start? Part Indiana Jones, part Stargate, the story of the Antikythera Mechanism is extraordinary, its implications profound.

In 1900 a team of sponge divers, sheltering from a storm on the island of Antikythera in southern Greece, made an unplanned dive of the greatest serendipity. To their astonishment they found the wreck of a ship containing the greatest collection of ancient Greek bronze statues ever found. Due to the excitement the remaining assorted fragments brought to the surface received less attention as plans to exhibit the statues were made. Among those fragments were the remains of a corroded metal apparatus which seemed to have some sort of gear wheels but was in such a state of disrepair that its purpose was a mystery.

The find was so rare because so few bronze artefacts remain from antiquity, as over the centuries bronze had almost always been melted down and reused. The find was dated to perhaps 100 B.C., meaning the Antikhytera Mechanism hadn’t seen the light of day for two millennia, but it would retain most of its secrets for almost another century before technology began to unravel one of the greatest mysteries of all time.

First X-rays were used to peer inside the device revealing a system of differential gearing so complex that it was 1,000, if not more, years ahead of its time. Later, when advanced photographic techniques were used to photograph the mechanism from multiple different angles illegible inscriptions on the device came into sharp relief and its true purpose came to light. It was the world’s first computer, a portable box containing virtually all the astronomical knowledge of the time. It showed the orbits of the planets, predicted eclipses and contained a calendar of major events including the Olympic Games.

The implications are staggering: 1,500 years before such advanced gearing was used by European clockmakers, the Ancient Greeks were able to design and build an astonishingly complex mechanical computer using ingenious mathematics to convert known astronomical data into a functioning model of the heavens, not to describe what had happened previously, but to accurately predict what would happen in the future. This requires a complete rewriting of our knowledge of what the ancients were capable of and teases us with the prospect that, had this technology not disappered, we might by now have ventured further out into the Solar System.

Featuring a cast of eccentric inventors, historians, mathematicians, photographers, scientists, ancient astronomers and seafarers, this riveting documentary exhilarates as much as it amazes.  Featuring brilliant reconstructions of the entire history of the mechanism, the divers, the storms and never before seen access to the device itself, this documentary does its subject justice, and that is saying something.

Then comes the big question: Who could have built such a machine? This documentary has a theory, a most pleasing one, which is well supported and in light of no other contenders one which I would like to believe is at least somewhat true.

Even if you are familiar with the details, sit back and prepare to be amazed by a barely believable story brilliantly told.

0
0   0
previous Neil Armstrong: First Man on the Moon
next The Funky Solar System