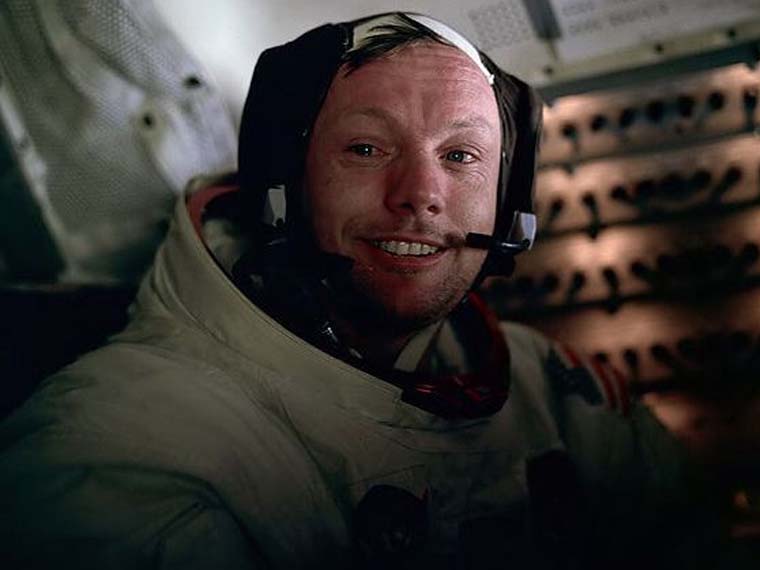 It was a monumental first. Greater than Columbus. Greater than any previous voyage of discovery. Played out live on TV across the globe, Neil Armstrong instantly became the most famous man on the planet.

A humble aeronautical engineer, Armstrong was not prepared for worldwide celebrity. He was however, the most prepared, capable and competent man to command the most daring mission the human race had ever undertaken.

Interviews with Armstrong reveal some of his close calls while test piloting the hypersonic X-15, a technological wonder which only the very best were chosen to fly. This put him into an upper echelon revered by other pilots.

In 1962 the loss of his two year old daughter to a tumour was a hugely traumatic event which he was unable to talk about. He dealt with it by throwing himself back into work on the demanding x-15 programme. By setting records for the longest and highest flights ever achieved he touched the edge of space. By the end of the decade he would go so much further.

It was an exciting and perilous time for the nascent NASA space programme. Great technical advancements went hand in hand with exploding rockets and regulars failures to launch. The whole endeavour involved untested technologies and procedures and the astronauts were required to adapt to constantly changing situations under pressure. On the first orbital docking mission, a rehearsal for how the command module and the moon-lander would separate and reconnect during the actual mission, both spacecraft became unstable when they docked.

Out of communication with mission control they had to act upon their own initiative and they undocked the two craft. However, it turned out that it was the Gemini capsule they were in which was the problem and after undocking they went into a spin at a rate of around a revolution per second. As mission control regained contact there was very strong concern that the two astronauts onboard would black out and it would be all over. Unflappable as ever, Armstrong managed to reach up above his head during this high speed roll, operate all of the correct switches in precisely the right order and slowly regain control of the capsule. “He found the solution and activated the solution,” says co-pilot Dave Scott, “it was my lucky day to have been flying with Mr. Neil Armstrong”. Upon landing, having saved the crew, and possibly the whole space programme, Armstrong drove his car home, chatted briefly to his wife in the kitchen and life went on as normal.

Further tragedy hit when his friends and fellow astronauts died in a cabin fire on Apollo 1, but the programme continued apace. Rigorous testing of all kinds was undertaken but the lunar landing vehicle was by its very nature going to be untried until the mission itself. What they did have was what the astronauts referred to as the “flying bedstead“.  Armstrong had a further brush with death on one test flight ejecting from the vehicle a fraction of a second before it crashed and burned. He was relatively unscathed although he did bite through his tongue in the process.

Ultimately, through an unpredictable series of events, Apollo 11 was chosen as the first mission to attempt a Moon landing with Armstrong as commander. Before embarking he gave his young family a short briefing about the mission, including its dangers, left his house, got in his car, and set off for the Moon.

On July 20, 1969, his supreme flight skills were called into action again at the very last minute when he discovered the landing site was strewn with large boulders and he quickly had to find a safe place to touch down with fuel rapidly running out. He landed The Eagle with less than 30 seconds to spare. What followed next enthralled the world. The flickering TV footage and those memorable, profound words became engrained in the public consciousness.  Armstrong, along with fellow intrepid spacemen Buzz Aldrin and Mike Collins, were transformed into the role of international ambassadors upon their return. A whirlwind world tour with parades and speeches was followed by a lifetime of global fame along with the burden of always having to say the right thing on every occasion. The relentless intrusion into his life began to take its toll on him and his family. Having retired from NASA he tried to resume some semblance of a normal life. He bought a farm and was unfairly considered a recluse by the media, largely because he had chosen not to live in the media spotlight. He became an enigmatic icon.

Full of incredible footage and interviews with all the major players, including some with Armstrong himself, this BBC documentary tells the amazing story of the right man in the right place at the right time.