Home Humanity The Century of the Self 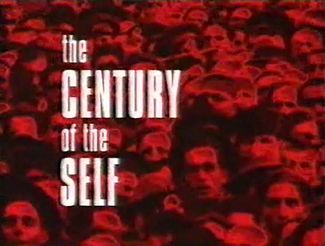 The Century of the Self (2002) is an award winning British television documentary film by Adam Curtis.

It focuses on how Sigmund Freud, Anna Freud, and Edward Bernays influenced the way corporations and governments have analyzed,‭ dealt with, and controlled ‬people.

Sigmund Freud, the founder of psychoanalysis, changed the perception of the human mind and its workings. His influence on the twentieth century is generally considered profound. The series describes the propaganda that Western governments and corporations have utilized stemming from Freud’s theories.

Freud himself and his nephew Edward Bernays, who was the first to use psychological techniques in public relations, are discussed. Freud’s daughter Anna Freud, a pioneer of child psychology, is mentioned in the second part, as is one of the main opponents of Freud’s theories, Wilhelm Reich, in the third part.

Along these general themes, The Century of the Self asks deeper questions about the roots and methods of modern consumerism, representative democracy, commodification and its implications. It also questions the modern way we see ourselves, the attitudes to fashion and superficiality.

“This series is about how those in power have used Freud’s theories to try and control the dangerous crowd in an age of mass democracy.” – Adam Curtis

More: The Century of the Self – Wikipedia

The Century Of The Self – Happiness Machines (1)

Part 2: “The Engineering of Consent”

Part 3: “There is a Policeman Inside All Our Heads: He Must Be Destroyed”